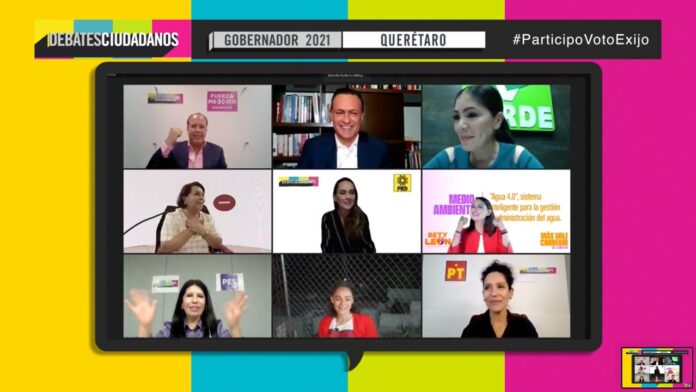 This Thursday night the second electoral debate between the candidates for the governorship of Querétaro was held by the Employers’ Confederation of the Mexican Republic (Coparmex) of the state and 22 other citizen organizations, where the accusations and accusations among the politicians and the employers’ union did not wait.

During the first segment of the virtual event, the candidate of Progressive Social Networks, Miguel Nava Alvarado, pointed out that the exercise organized by Coparmex was “farce” by pointing out that the questions were given in advance to the candidates; After finishing his initial message, he disconnected from the virtual debate and did not participate in the exchange of ideas.

“This is not a debate because they gave us the questions a few days ago, this is a farce, there is no debate when they give you the questions and everyone can already bring them up. There is no debate when in the reply you choose who answers you and who does not, it is unfortunate what Coparmex does and in my particular case, I am not going to legitimize this cheap show, ”Nava said.

However, after the accusations of the RSP candidate, the debate continued with the participation of the other nine candidates for the governorship of the state, where issues of education, health, security, economy, gender equality, foreign investment and the environment were discussed.

Candidates and candidates reiterate their proposals

The nine candidates for the governorship of the state reiterated their proposals through the round of questions. The PAN candidate, Mauricio Kuri, pointed out that he will make Querétaro an industrial corridor, as well as seek new development poles with companies from other continents.

Raquel Ruiz de Santiago, from the PRD, said that she will exert pressure to respect the agreements on the T-MEC and assured that she will double the budget of the Autonomous University of Querétaro.

For her part, Katia Reséndiz (PVEM) added that she will strengthen the state’s automotive and aerospace sectors. Likewise, Penelope Ramírez (PT) indicated that she will boost public credit for businesses and will work on a penal infrastructure.

The candidate of the Citizen Movement, Beatriz León, touched on the immigration issue assuring that it will guarantee foreigners the right to a dignified life in the state, with rights and benefits.

Celia Maya, Morena’s candidate, promised an inclusive and transparent government, as well as the expansion of Aqueduct II in the capital city. In her speech, Abigail Arredondo (PRI) added that she will strengthen the state’s producers.

The candidate of Fuerza por México, Juan Carlos Martínez, reiterated that he will build a “Psychiatric Hospital” that cares about the mental health of Queretans.