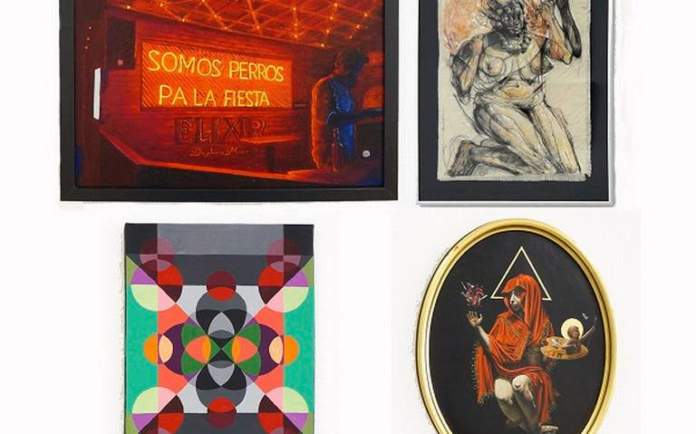 On the other side of the Atlantic Ocean, in Sevilla, Spain, a small window was opened to the art that is made in Querétaro and other corners of the country. The exhibition is entitled “Mexican artists, Querétaro area”, and 14 authors participate in it with their pictorial proposals.

Gabriel Astaroth, one of the four selected Queretans, shared with DIARIO DE QUERÉTARO that this is his first international exhibition for which he prepared a work entitled “Painful”; a piece that was made with mixed techniques based on oil, blood, gold leaf and silver on linen, described as a very intimate creation:

“It is a catharsis with which I close a cycle of my life and at the same time, it is a rebirth ( …) The name is a mixture of the words pain and oil, two substances that are very present in it ”.

The exhibition is located in Galería Zunino and took place from the connection of this Sevillian venue with Galería Impulso, which last year launched a call for intercultural exchange between Mexico and Spain to be generated through the creators.

From this sample, multiple views converge that reveal the contemporaneity, the problems, and complexities that concern today’s society, and that at the same time, make a nod to Mexican traditions from the artistic brush of Queretaro, which is part of the moment the current history of art in the country.

“How do we see ourselves today through painting? What does it mean for an artist to be Mexican? What image is drawn in our head when we think of contemporary Mexican painting? What artists have marked my artistic production? What identifies me as a Mexican artist? ”, are some of the questions that the Sevillian gallery proposes as an introduction and invitation to the public to enter the exhibition from a cultural approach that suggests an exchange of perspectives.

The exhibition will run until May 22, and the public can consult the exhibition catalog on the official website of the venue: www.galeriazunino.com

It is worth mentioning that the artistic exchange generated from this initiative will result in an exhibition that will be held in Querétaro between August and September of this year, at Impulso Galería, with the work of Spanish artists who, in the same way, have worked on artistic concepts. specifically to share his perspectives, techniques, and inspirations with the Mexican public.

Located in Jardines de la Hacienda, Querétaro, Galería Impulso is an independent project that seeks to make visible and promote local art. They currently have work by artists such as Lucy Magaña, Ramsés de la Cruz, Rubén Maya, Víctor López and Luis Sánchez, among others.