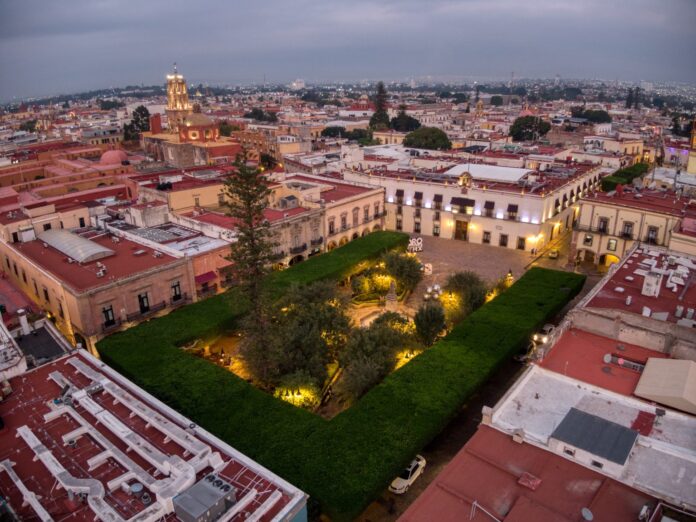 If you have wondered which are the best cities to visit in Mexico, you will find that Querétaro is one of the options that you cannot miss. Its large number of cultural and architectural attractions and nightlife suitable for all requirements make this Bajío metropolis a true recommendation for vacationing, spending a weekend, or taking it as a stopover to undertake a trip to the interior of the state.

Nor can we talk about Querétaro and its great cosmopolitan life without mentioning that everyone who has visited the city and its metropolitan area has recognized, and you will be able to verify, that it is one of the cleanest and safest places in Mexico.

That is why we share three keys to enjoy this wonderful heritage city and organize an itinerary if you choose it for your next trip.

Querétaro: from a provincial city to a cosmopolitan city

In recent decades, Querétaro has undergone unmatched economic development that has led it to become one of the 10 best cities in Mexico and one of the 5 best tourist destinations in the interior of the country, as growth has filled streets and avenues of top quality services that harmonize with the beauty of the capital.

Since the view leaves the road landscape behind and the city opens, you will be able to realize its magnitude and, the best, as in art, is in the details.

In addition, thanks to the accelerated development of the city, there are large shopping malls that are a meeting point for thousands of people due to the innovative environment of their spaces and the variety of restaurants, bars, and exclusive commercial brands, which together form a healthy family environment for all generations.

In the Historic Center of Querétaro, by its nature, it is normal to find old houses redesigned to give you accommodation in a unique environment, a few steps from squares, temples, and other attractions that the heart of the city offers; Whether in an exclusive viceregal environment or in an environment of modern minimalist and holistic designs, your stay will be something that you will add to the pleasant experience of your trip to this city.

The Historic Center of Querétaro is a place that you should definitely visit on foot. Through its streets the splendor of its architecture of a city became the third most important during the viceroyalty in the 18th century, when some of the buildings and monuments that today are emblematic of the city were built, were visible. In fact, since 1996 it was named a World Heritage Site by UNESCO, as a Zone of Historical Monuments.

It is also worth going in and discovering the impressive golden baroque altarpieces that can be found, such as the one in the Temple of Santa Clara and others that you will soon discover when you go.

Among the most important are Plaza Fundadores, Plaza de Armas, Jardín Guerrero, and Jardín Zenea, in which it is common to find concerts and outdoors or guides with their groups of tourists who entertain themselves with anecdotes behind the places they visit.

Querétaro is a cultural city in every sense. People of different nationalities come to the city, in the same way, that from other states of the republic or from nearby rural communities they have decided to make it their place of residence; A reflection of this multiculturalism, it has various spaces to house the different artistic and craft manifestations that converge in this fabulous city.

A cultural tourist walk through this great city, you should not miss visiting the Museum of Art of Querétaro, the Museum of Contemporary Art, Libertad Gallery, or the Calendario Museum, but you will know that they are not just half of those that are nearby.

The Indigenous Handicraft Development Center (CEDAI) and the House of Handicrafts are the places of exhibition and sale of this type of creations that have a traditional feature of the communities and municipalities where they are made, making it very attractive for visitors. acquire and know the Queretaro culture from another dimension.

Top of the 10 places you must visit in Querétaro

It is considered that its time of splendor occurred between 900 to 1200 AD, but today it is a great tourist center due to its magnitude, its site museum, and the particularity of finding an immense pre-Hispanic vestige surrounded by the modern urbanization of the metropolitan area.

This baroque construction from the 18th century is an obligatory act to be contemplated every time one enters its interior, which harmonizes in an unbeatable way with the permanent exhibitions of Renaissance painting or the Academia de San Carlos, as a preamble to the temporary rooms of contemporary art.

This place, today adorned with large murals that represent the country’s struggle for independence, was the site of the conspiracies that, once discovered, gave rise to the armed movement that would culminate years later in the Independence of Mexico as part of the Spanish crown. So the anecdotes that you will find, with the right guide, will be part of an invaluable cultural experience.

It is said that it was the first to have a four-sided clock tower in all of Latin America and the Arabic details make it unique in the region. In front, in the square dedicated to its famous architect, they currently have a show of dancing fountains that at certain times is accompanied by a spectacular video mapping on the facade of the temple.

It was built by Juan Antonio de Urrutia y Arana, a Spanish marquis who came to the city of Querétaro to accompany his wife to visit the foundation of the Capuchin order of nuns, but who would carry out the most important architectural work in Querétaro at that time. and that today, almost 300 years later, it is the main icon of the city and the state of Querétaro.

In addition to a large quarry cross that is inside as a symbol of that mythical anecdote, where the battle between Chichimecas and Spaniards ended with the appearance of the Apostle Santiago in the sky next to a resplendent cross; A curiosity of this temple is that in its garden there are trees that produce thorns in the shape of a cross, which for decades have been valuable souvenirs for the believers who visit Querétaro.

In addition, it has access to the roof with a great view and a pleasant garden with a food area to have a cup of coffee or lunch to calm hunger in a quiet environment.

This site must be accompanied by a prior visit to the Museum of the Restoration of the Republic, a couple of streets from the first painting of the city, where objects, documents, and paintings related to this passage of history are exhibited, right where he was imprisoned. the emperor before his death.

Come to the city of Querétaro. If you are looking for a place of architectural beauty, fun, flavor and culture, this city is fascinating.