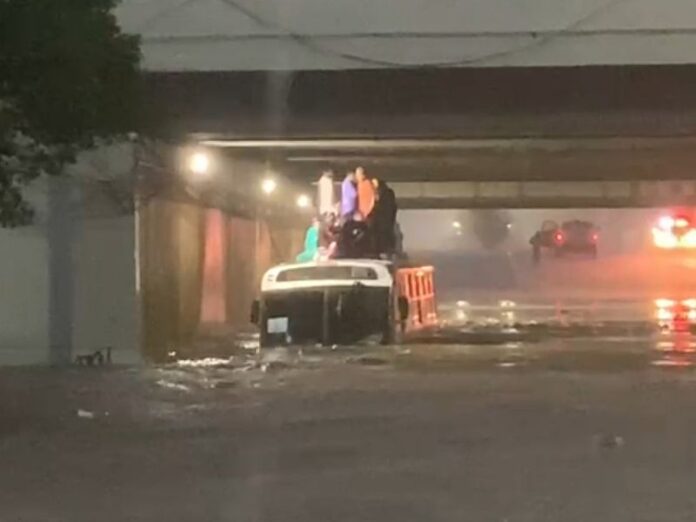 The rains of the last 72 hours continue to punish Querétaro. On Saturday night flooding was reported in municipalities of this entity and in the state capital.

Over than 2,000 people evacuated in San Juan del Río, Querétaro

According to unofficial figures that emerged, the accumulated reached 100 millimeters, considered extraordinary and being the highest of the current rainy season.

At least a dozen passengers on a bus had to climb the roof of the unit, after the truck in which they were traveling was trapped in a flood registered under the bridge of Pasteur Avenue and Highway 57 in the city of Querétaro.

At the site, the driver of the passenger unit tried to cross the flood, however, he was trapped in mid-step, so the passengers opened the emergency hatch to climb to the roof of the unit after the water began to rise. leak immediately.

Civil protection personnel and firefighters arrived at the place, who helped the passengers to leave the place.

In addition to this incident, at least two other vehicles were trapped in floods registered in the streets of Querétaro.

In the pluvial canal of Candiles, a private car was trapped; while in the parking lot of the commercial plaza in Zaragoza, another car was partially covered by flooding.

Through his social networks, Governor Mauricio Kuri González affirmed that he was in constant communication with state civil protection “and the authorities of the municipalities that have been affected by the rains.

All the efforts of our government will be at the service of the families that have been harmed, until normality is restored ”.

In the last 48 hours, in Querétaro intense rainfall has impacted that have caused flooding in San Juan del Río and Tequisquiapan, where the greatest contingency is reported; but also the state capital, the municipality of El Marqués and Corregidora have reported flooding, while mudslides and landslides have been reported in the mountains of the state.

Some of the most important effects were flooding, neighborhoods were without electrical service, in some cases, the water managed to enter establishments and homes.

The authorities had to help the driver of a vehicle that fell into a canal on Candiles Avenue.

Formation of sinkhole due to rains in Querétaro

The floods caused the formation of a sinkhole in Avenida Candiles, near Fernando Díaz, taking a car. The driver of the private vehicle is sought by elements of Civil Protection.

The heavy rains were also severe in another municipality, El Marqués, where the river that runs through the Saldarriaga neighborhood overflowed and there was flooding in the Santa Cruz neighborhood.

Two bodies were rescued in the riverbed of the Querétaro River

Six hours after the accident, Civil Protection and Fire Brigade members of Querétaro found the bodies of a man and a woman in the vicinity of the Queretaro River stream located on the Tlacote highway, entrance to Santa María Magdalena and Campo Militar, for which they carried out garbage removal work to recover people, while elements of the Prosecutor’s Office carried out the corresponding proceedings.

Impacts due to the rains

On Guerrero Street with September 16, they are without public lighting service, Civil Protection personnel ask the population to contact 911 in case of any emergency.

Flooding was recorded above the level of the sidewalk in Bernardo Quintana and Espuela del Ferrocarril.

In the same way, there were important floods in the Los Molinos neighborhood.

At the level of the sidewalk, flooding of water was registered in the Literatura avenue within the Carrillo neighborhood that was reported in the Civil Protection monitoring .

On Ezequiel Montes and Pino Suárez streets, in the Centro neighborhood, a flooding that reaches the level of the sidewalk was also reported , take your precautions.

In Guerrero Street in the Centro neighborhood, in addition to the lack of electricity in one area, significant flooding was also reported.

Another of the affectations of the Centro neighborhood was between Allende Street and Zaragoza.

Other damages due to the rains

Three churches were affected by the rains

So far only three churches have reported damages due to the rains registered this Saturday, announced Martín Lara Becerril, vicar of the Diocese of Querétaro, who explained that the damage was registered in the Temple of the Holy Spirit, Santa Clara and the Parish of the Divina Providencia, from Casa Blanca.

Lara Becerril mentioned that at the moment she has not had reports from churches in other municipalities; however, he said that they will be visiting them and communicating to obtain more information.

The entry of water into the Temple of the Holy Spirit and the elementary school on Ocampo and Pino Suárez streets, in the Centro neighborhood, was reported, with no people injured so far

The Ministry of Public Safety and Municipal Transit of El Marqués , asked the population to take extreme precautions, due to the water level, the passage on the El Colorado bridge was restricted.

The partial closure of the road on Paseo de la Constitución Boulevard, Plateros corner was carried out.

Another preventive road closure, on the avenue 5 de Febrero, at the height of the Obrera neighborhood, in the direction of San Luis Potosí.

Likewise, a road closure was made to Camino Real, at the height of Cumbres del Roble, in the Corregidora municipality. The authorities are in the area supporting the population.

The municipal mayor of Querétaro, Luis Nava confirmed that the Civil Protection, Public Services and Delegations teams work in different parts of the municipality to attend to damages.

In addition, he is personally on a tour of the Casa Blanca neighborhood to assess the effects caused by the rains.

For its part, the Municipal Coordination of Civil Protection, asks the population to be aware of the official media, exercise caution when driving and avoid leaving home.