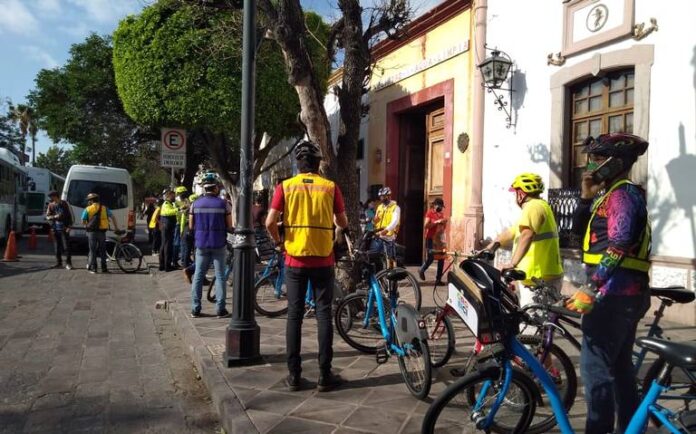 Collectives and groups of cyclists participated this Friday in a supervision and evaluation tour carried out by the Ministry of Mobility of the Municipality of Querétaro for the cycling infrastructure of the city, to detect areas of risk and danger for the population.

Agustín Osornio Soto, president of the civil association Saca la Bici, reported that a route of five linear kilometers would be carried out to detect -where appropriate- ditches, open grates, potholes, non-functional buffers “topes”, and bicycle lanes that are invaded by cars, among others. .

He pointed out that cyclists in conjunction with municipal authorities will analyze the mobility corridors – not just bicycle lanes – to detect areas that could affect all mobility actors, such as pedestrians, cyclists, public transport, and motorists.

“A supervision will be carried out, particularly of an area of ​​5 linear kilometers and some issues will be seen on public roads such as damage, failures, problems, conflicts and risks, which endanger the general population, who travels through any means of transport, ”he said.

“It is a field exercise, it is a supervision, an evaluation of the proposals that are developed in the cabinet, and they summoned cycling groups, collectives, the general population, to join this practice of supervision and evaluation of roads “, He said.

He pointed out that as a civil association that has more than 12 years, Saca la Bici has also collaborated in this type of analysis with at least five municipal administrations, but this is the first time that the current administration has carried out this evaluation exercise.

Agustín Osornio trusted that this call for participation for cyclists, is not false or “a flash in the pan”, but is really functional, practical and applicable to improve road infrastructure.

“What it is about here is to give our point of view based on experiences, particularly of a means of transport such as the bicycle, and as cyclists, we have that daily practice of riding precisely on the roads, and we have always detected the risks and dangers, ”he said.

Finally, he reiterated the call that cyclists have requested for more than a year and a half of pandemic, which is the creation of emerging lanes or temporary bike lanes, “we are missing a lot in this regard.”