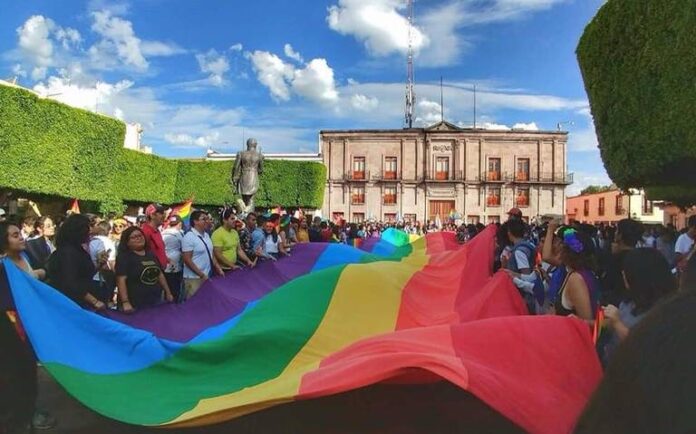 Often overshadowed by the raging gay scene in Mexico City, gay Querétaro – just a few hours drive away – has quietly and steadily grown its own unique queer nightlife scene that is beginning to tempt tourists away from the chaos of Mexico City.

Combining historic architecture, famous food and a decidedly slower pace of life than Mexico City with lively queer clubs and bars seems to be have been a winning formula for Querétaro with queer travelers slowly waking up its potential – or combining it with a trip to the nearby San Miguel de Allende. The first-ever LGBT+ Pride March Querétaro was also held in 2017 – quite the move for a city once considered a stronghold of conservatism, tradition, and Catholicism in Mexico!

With a population of almost one million, Querétaro is no small city – and the thriving nightlife and arts scene is a testament to this. Travelers going to experience gay Querétaro can expect to tour beautiful churches and an incredibly well-preserved old town filled with intriguing museums by day and indulge in the famed Cecina Seca con Naranja Agria (dried pork with bitter orange)by night before heading out to one of the many gay bars and gay clubs in Querétaro.

Top this all off by staying in a luxury gay-friendly hotel in Querétaro and you can see Querétaro is set to become the next big gay Mexico city destination!

Note: Same-sex marriages became legal in the municipality of Santiago de Querétaro in 2015 and has energized gay life in Querétaro, as it has across Mexico in other states where it is legal. Mexicans, in general, are becoming more accepting of differing sexuality and lifestyles, though the Catholic Church’s influence remains strong. Thankfully LGBT travelers rarely experience open discrimination or violence.

Gay travelers in Querétaro should take special care in less developed areas in terms of public displays of affection where many residents may be less exposed to LGBT culture and may hold conservative attitudes…Though any reaction is more likely to be curious than outrage. Overall Querétaro is very safe, especially compared to other Latin American cities, and a common-sense approach to travel will generally ensure you have no issues exploring this beautiful and diverse city.

Are you relocating? This guide will help travelers discover the queerer side of the city. However, if you are lucky enough to be considering a move here, we recommend getting in touch with a local gay realtor. They can happily give you no-obligation advice and all the information you’ll ever need to know about your new city. And if you then want their help to find your dream home, you are guaranteed fair, equal, and honest representation. No surprises or awkward conversations necessary!

The city of Querétaro is one of Mexico’s most popular tourist destination in large part because of its diverse mouth-watering culinary heritage, awe-inspiring colonial architecture, and close proximity to Mexico City. Most of the top attractions of Querétaro can be seen wandering the historic downtown, but there are a few things you will not want to miss. Adventurous travelers will want to make a day trip to the nearby Cerrito archaeological ruins, a place of ancient worship used up until 1632.

Don’t forget to steep inside the Museo Casa de la Zacatecana, a 17th-century mansion turned into an incredible museum, or wander under the Acueducto de Querétaro to see a striking example of why Querétaro was awarded UNESCO status. For lovers of Mexican Art, you should plan time for a visit to the recently renovated Museum of Sacred Art, which is not only free but housed a grand colonial mansion. If you have had enough of the old town you can escape to the Zenea Garden with its beautiful fountain and historic gazebos, or a bit more fun might be the Parque Bicentenario with its amusement and water park rides including roller coasters, a lazy river & water slides. And of course, it goes without saying you need to wander around the imposing Querétaro Cathedral and just get lost in the old town with all its winding streets and beautiful doorways!

In Querétaro Mexico, you would be hard-pressed to find a major hotel that had any issues with gay guests  – but some hotels are more popular with queer travelers due to their location and inclusive environment or vibe, which are featured here. These gay-friendly hotels in Querétaro are frequented by members of the LGBT community and have great reputations. Each hotel and area offer something very specific, so be sure to choose the right style and location to meet your needs.

Prices are cheap compared to North American and European hotels (thought quickly rising) and standards are high – so it’s a great place to splurge! Of course, there are also hundred’s more hotel and hostel options in Querétaro if none of these suit your desired budget, facilities, or area!

While the beautiful colonial architecture and delicious Mexican food lure you in – It is gay Querétaro’s bars and clubs that really make Querétaro worthy as a gay vacation destination idea. Anyone who knows anything about Mexicans knows they love to a good fiesta, and while Querétaro might be laid back and chilled by day, its gay nightlife is anything but!

New clubs and events are taking place consistently here so it pays to ask around when you arrive (hotel staff is a good bet) but at the moment here are the most popular nightlife spots and gay clubs in Querétaro for travelers and locals. Things will get crazy – but just go with it and don’t forget your common sense.

Unlike in other gay cities in Mexico such as Puebla and Monterrey, there is a very limited sauna scene in Querétaro, largely led by the popularity of cruising in bars and apps such as Grindr. Please update us if you discover any new gay saunas in Querétaro (or cruising locations in Querétaro) but for now, there are two options.