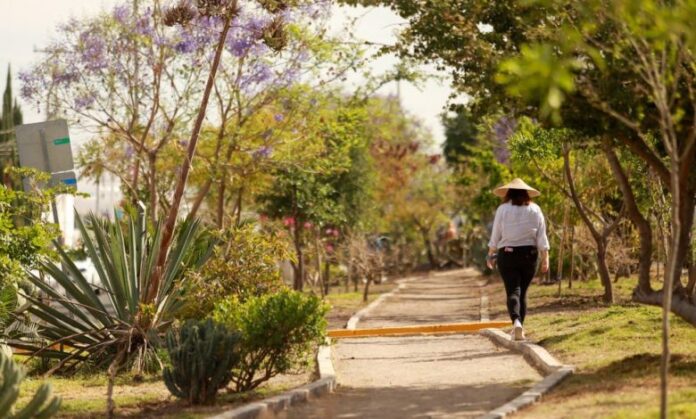 Within the framework of the Respira Querétaro program, Cadena OXXO, SA de CV, joined the effort of the Municipality of Querétaro to have a green city with the donation of an irrigation system for the so-called Pulmón Gobernadores, located in the Vista Azul neighborhood, and with which the cost of watering this area of ​​more than eight thousand square meters will be saved up to 80 percent.

The Municipal President of Querétaro, Miguel Antonio Parrodi Espinosa, thanked the company’s commitment to society and the environment, as well as the residents of Vista Azul for taking care of the green area; for which he announced the donation of 150 thousand trees to ensure the quality of life of Queretaro families.

«It allows us to demonstrate with facts such as the triple helix, how by adding effort we can improve many aspects of the lives of citizens, such as the environment. Citizen participation has been incredible: from girls and boys in schools, and families in the neighborhoods, to companies, like you, who have decided to join in so that there are more and better green areas in our city, “he commented.

During his speech, the Secretary of Sustainable Development, Genaro Montes Díaz, said that this action transcends the national level, as the OXXO Chain is the first company to make a donation of such magnitude, for which he thanked them for the confidence of making Querétaro the first city in the entire Republic where they join with this type of project in favor of nature.

Finally, the Expansión Manager of OXXO, SA de CV, Perla Rivera Castelán, mentioned that more than 700 thousand pesos were invested in the irrigation system and that it is an important achievement because it is considered a socially responsible company and that it had the opportunity to promote an important change in favor of ecology, which is why he called on more companies to join the Respira Querétaro program.