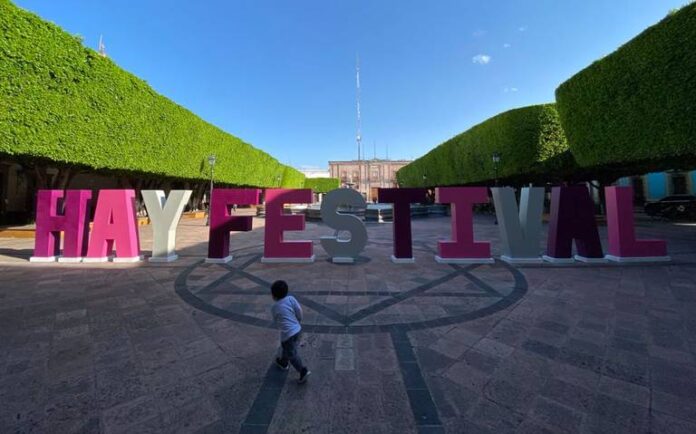 In its sixth edition with the city of Querétaro as its headquarters, the Hay Festival starts today and will conclude next Sunday, with a program that brings together more than 170 guests from 19 countries, in a hybrid format, where around 80% of the activities It will be carried out digitally and the remaining 20% ​​in the face-to-face mode, with a capacity of 30% in closed spaces and with several of these activities in open-air spaces.

The program headed this year by four Nobel Laureates: Svetlana Alexiévich (Literature 2015), JMG Le Clézio (Literature, 2008), Joseph Stiglitz (Economics, 2001), and Esther Duflo (Economics, 2019) is committed to keeping alive the spirit that has governed this meeting in its past editions.

“Our great challenge is to continue to maintain the interest of viewers and viewers in a format that will be virtual in more than 60%, the challenge will be that this combination of face-to-face and digital works, and that the interaction of people in virtual and it can be given in person ”, confides Izara García Rodríguez.

The Hay Festival coordinator for Latin America and the Caribbean ensures that with the experience of last year and with what they have been able to see in other virtual festivals and fairs, they managed to plan a diverse, interesting and attractive program that will be driven by the interaction between the thinkers and writers with viewers to maintain audience interest.

An optimistic festival full of dialogue about current cultural, economic, social, and scientific events, is what the Hay Festival Querétaro seeks to be, whose sixth edition will take place in a hybrid format from September 1 to 5.

“I believe that the powerful festivals with important figures, like this one, that has been carried out have supported people who have been very lonely and have been a window to the world for them,” says Cristina Fuentes La Roche in an interview with Efe. , international director of the Hay Festival.

According to the director, the experiment of carrying out the event in a totally virtual way in 2020, gave a small sample of the importance of cultural festivals in such adverse times and left a precedent in the success of transferring the conversation to the digital format.

“We noticed that the people who signed up for the festivals did not do so just to listen, but to participate. People want to feel part of a community, and at that time the virtual ‘chats’ were red hot, with people giving ideas, giving opinions and it was a way of feeling connected ”, she mentions.

Recovering the virtual experience, before the return of some face-to-face events with limited capacity, this edition will be held in both formats, the first on its website and social networks, while the second will be from the city of Querétaro, the capital of the homonymous state in the center of the country.

“Through the platform, it will be possible to participate in public conversations, there will be interaction with the authors through questions and it will have simultaneous translation, but it is important that people register before the events,” says Cristina.

The talks will be available on the platform for two weeks once they are published, and some of the events will be broadcast simultaneously on the festival’s Facebook page.

The edition, which will take place from September 1 to 5, will once again bring together great personalities from various fields.

Some of the most prominent are the four Nobel laureates with the presence of the Belarusian, Svetlana Alexiévich, and the French Jean-Marie Gustave Le Clézio, both winners of the Nobel Prize for Literature and, in Economics, the French Esther Duflo and the American Joseph Stiglitz.

There will also be the participation of prestigious writers and journalists such as the Spaniards Javier Cercas and María Dueñas, the Lebanese Amin Maalouf, the Mexicans Sabina Berman and Juan Villoro, among many others.

However, as is usual in the festival, very popular figures in more commercial areas once again have a space for the social causes that permeate their projects, such as the actor and activist Diego Luna and the musician of the legendary band Café Tacvba, Joselo Rangel.

“We are interested in creators who also have a look at their country and its reality and who want to change it through culture. There is also the pianist James Rhodes, who experienced sexual abuse and who has used his story to help change this issue. Those characters transcend what they do, ”Fuentes mentions.

However, Hay Festival will also address issues of gender violence and feminism, the urgent environmental crisis and various talks will put in context the challenges that the publishing industry has gone through and the impact of the world economy due to the pandemic, as well as activities dedicated to children.

“It is a very syncretic festival and the topic of the pandemic will be treated in a transversal way and will touch all the talks. We wanted to make an event that would be a space for reflection in these moments and with some optimism, that we need a little of that to see the future as well ”, she assures.