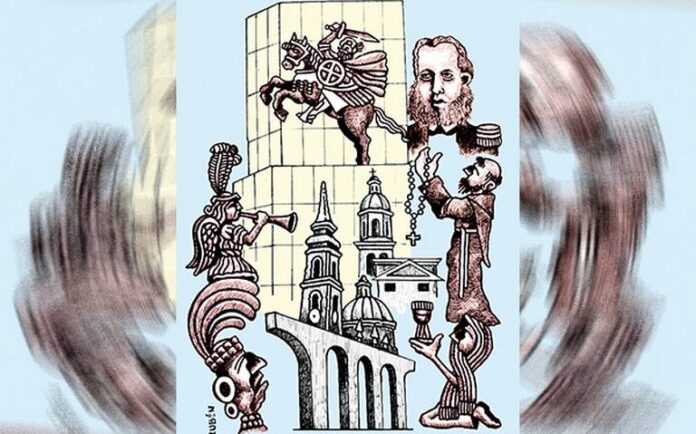 What has happened during all this time? The writer Manuel Naredo recounts the events and historical facts that have made it one of the most important demarcations in the country, not only for its history, cultural heritage, and architectural beauty but also for its economic and industrial development.

Querétaro is a city deeply linked to the legend. Perhaps because of the personality of its inhabitants, because of the long ostracism that sheltered it for centuries, or because of the deeply rooted religiosity that is its own, the history of this “holy inland city” has gone hand in hand with inalienable beliefs and assumptions.

Since its foundation, on a day like today but in 1531, when it is said that, in the middle of that bloodless battle on the Sangremal hill between Spaniards and natives of these lands, the Apostle Santiago appeared in the sky and on horseback, in his traditional version called “kills Moors”, to give the victory to the peninsular and thus start a new population, which would become, in due course, the third-largest in the Viceroyalty.

Beyond the legend, the fact is that this “town of Indians” which they called Querétaro, from the Purépecha “place of rocks”, began a path in which hopes and desires were united, and Christian customs were intertwined with indigenous ones. , as well as their lifestyles and even their architecture.

Below the hill, starting from the Convento Grande San Francisco, a rectangular trace, as was the custom of the Spaniards of the time, and upwards, in the surroundings of Sangremal itself, the winding streets and the simple constructions that would coexist with the most ambitious ambitions of the Spaniards in a framework that would help, with the passage of time, to Unesco consider the city to inscribe it on the world heritage lists.

And from there the legend as a path bordering one of the forceful facts; a parallel story that was being woven between the sayings of the city dwellers, willing to explain with supernatural facts what could perhaps have a much simpler, but less interesting explanation.

Querétaro, with its privileged location in the Silver Pass, effectively became one of the most important in that New Spain, and here were born, or settled, very important characters for its future, among which Don Juan could stand out. Antonio de Urrutia y Arana, who embarked on the adventure of building one of the most impressive hydraulic works in the world, or Mrs. Josefa Vergara y Hernández, able to donate her large money for the benefit of the most vulnerable, or Mr. Juan Caballero y Osio, mayor first and priest later, who donated possessions and built religious buildings for the city, or Ignacio Mariano de las Casas, famous builder, organist, and watchmaker.

It was then, those of those centuries in which the Spanish crown ruled our territory, those of the most splendor for a Queretaro rich in Baroque architecture, in abundance, in quality of life, and of course, in legends. Until right here, supported by the Corregidor himself in turn, and by his wife, the thick walls of their mansions would become mute witnesses to the conspiracy of a group of creoles dissatisfied with what was happening on the other side of the Atlantic and with the privileges of Spanish origin. Thus, Querétaro became one of the cradles that gave rise to the independence war.

Years after the consummation of national independence here would be the grave of the second Mexican empire, with a sick and besieged archduke who resisted what he could and who was shot with his closest generals on a small hill called Cerro de las Campanas. After the long neglect that the city suffered after its conservative role in that sad story of Maximilian of Habsburg, the legends that gave color to history were solidified, with the complicity of his gatherings: the tunnel through which the European prince, from La Cruz to the hill where he surrendered his sword to Escobedo; the sinful relationship of Doña Josefa Ortiz de Domínguez with the handsome military man Ignacio Allende; Don Bartolo’s contract with the devil and his chilling epilogue; the other tunnels and more tunnels through the city;

Querétaro, in some way, had to bear that conservative condition, with that imperialist letterhead, until the Porfirian splendor endowed it with Frenchified tastes, vain refinements, social gatherings and “jamaicas”, walks around the contours and a couple of railways with those whose inhabitants felt closer to the dictator’s designs. After the Revolution and its times of shock, Venustiano Carranza, lover of its nearby waters and its tranquility, gave it such national relevance that it even made it the capital of the Republic.

And here, in its also Porfirian theater, the Constituents of 1917 granted the country a Political Constitution that still, and despite its multiple and constant reforms, is fundamentally valid. The transcendent event once again allowed Querétaro to become, once again, the protagonist of national history.

But later, in a good part of the twentieth century, that city where the Apostle Santiago appeared to settle a dispute, became a passing population, just a distant vision of its impressive aqueduct or the many domes of its temples; of a reference road to Mexico or the north, without much relevance for tourism. A condition that was reversed, one by one, with industrial investments and the so-called “Chilanga invasion”, carried out by many residents of the country’s capital who found a better and calmer way of life here.

Without its residents noticing it, the city grew overwhelmingly, becoming a city of more than a million inhabitants and one of the most attractive places to live and invest. The city changed its tranquility from once into vibrant movement, its oblivion into force, its lethargy into frenzied living. Queretanos became a minority, but they did not become extinct but were reborn in new generations with parents who came from abroad.

And there the legends continued, from the hand of its inhabitants, blurred or magnified by word of mouth, or in the voice of the tourist guides. Its impressive built-up historical heritage was surrounded by buildings and shopping centers, housing subdivisions, and industrial and business constructions. Their farmland became extinct on the basis of cement and brick, and the houses became shops or boutique hotels.

But that Querétaro that was born with a bloodless battle, that gathered deputies in their canteens willing to write a new supreme law, that listened to the bohemians disguised as the conspirators, who showed their domes to the almost lifeless eyes of Maximiliano, who He lent his best moments to the national history, which still shelters in the legend the explanation of its unknowns, it is more alive, more radiant and more hopeful than ever.

As part of the celebrations for the 490th anniversary of the city of Querétaro, a parade was held in honor of Santiago Apóstol, whose legend gave rise to this demarcation.

Dozens of people, including men, women and children, toured some of the streets of the Historic Center mounted on horseback with religious insignia dedicated to this saint.

It was in the streets of September 16 and Próspero C. Vega, where the parish of Santiago Apóstol is located, where they traveled to give honors and celebrate another year in this city.

Likewise, the priest of this parish came out to receive the parishioners, granting them the blessing with microphone in hand and thanking them for their visit.

Meanwhile, the population remained expectant when they saw this parade, who took photographs until the riders left the place to continue on their way.

It was in the Temple of the Cross, the Holy Cathedral Church and the Parish of Santiago the places where the celebratory acts in honor of Santiago Apóstol were held.

Various events were held during the day to continue the commemorations in which there were fireworks and an official mass from 6:00 in the afternoon by the Diocese of Querétaro.

It should be noted that during the night there was a ringing of bells for 10 minutes in the different temples of the city. 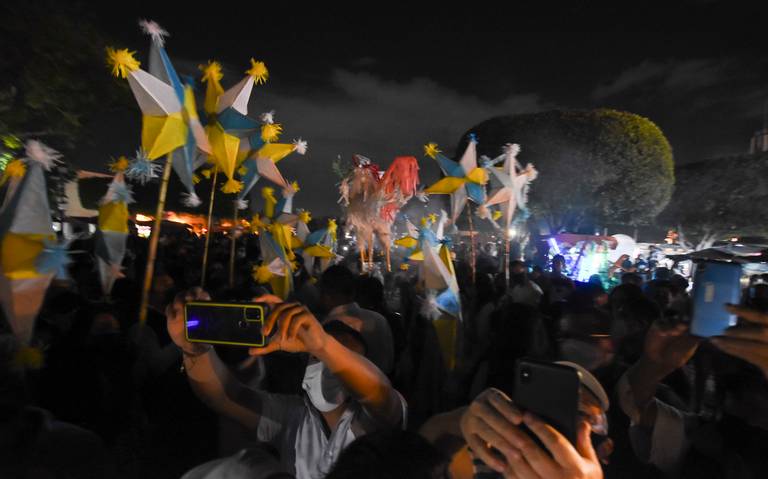 The population behaved 100% during the festivities for the 490th anniversary of the city of Querétaro, informed the director of the Civil Protection Coordination of the Municipality of Querétaro, Carlos Rodríguez Di Bella.

He indicated that the Municipal Civil Protection elements were present in the different events organized by the Diocese of Querétaro, mainly in the first square of the city, and no incidents were recorded.

As part of the celebrations for the 490th anniversary of the city, the Diocese of Querétaro carried out celebrations, conferences and prayers in different churches of the city, such as the ringing of bells and pilgrimages