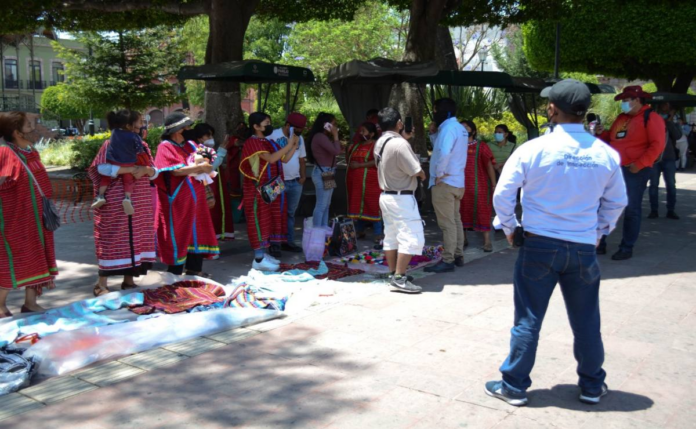 The authority ensures that I act within the framework of legality

Querétaro.– The municipal government of Querétaro confirmed “the securing of merchandise” to a group of Triqui artisans from Oaxaca who sold their products in the Historic Center of Querétaro, but denied that the inspectors had stolen the products they took.

The above after a video that circulated this Wednesday afternoon on social networks shows a group of municipal inspectors, dressed in blue vests, approaching where the group of artisans is and taking their goods to a truck white pick-up. In the background you can hear screams from the women – stationed on the griddle in the Zenea garden – shouting that they are being robbed.

In this regard, the municipal government released a statement almost at midnight on Wednesday in which it assured that the “act of the municipal authority was within the framework of legality.”

“Faced with alleged accusations by street vendors, who pointed out the alleged theft of merchandise by public servants of the Municipal Inspection Directorate, the General Secretary of the Government specifies that the act, totally legal, was about the securing of merchandise that was sold in public roads illegally and in places restricted to pedestrian traffic due to the health contingency caused by Covid-19 ”.

Photo: Courtesy of the municipality of Querétaro

Once the situation was detected, the statement said, municipal staff spoke with the informal vendors, originally from the state of Oaxaca, inviting them to leave the places where they were installed, but “despite repeated calls not to carry out such commercial activity, they did not show the will to do so, so they proceeded to confiscate and properly safeguard the merchandise that was exhibited. “

The Directorate of Inspection in Commerce said that since the morning of this Wednesday a dialogue was established with Claudio Reyes Merino, representative of some 15 Triqui merchants, who were demonstrating for spaces for sale on public roads, in another part of the Historic Center.

The municipality of Querétaro, they say, respected the right to demonstrate at all times, but that did not give rise to exercising informal commerce on public roads specifically in the Zenea Garden, since it is an unauthorized activity and also contravenes preventive health recommendations. due to the Covid-19 contingency.

Photo: Courtesy of the municipality of Querétaro

The municipality of Querétaro supported the actions of the Trade Inspection staff, “beyond the fact that the Triqui merchants sought to impede their work.”

In the same way, the authority says that it is in the disposition that, through the channels of dialogue and legality, which are of a public nature, this situation is addressed.

For this, the Secretary of Government announced directly; Tonatiuh Cervantes, will take care of the personal attention of the subject.

They specify that as occurs in these procedures, “the insured items are duly inventoried and at the disposal of their owners, in accordance with the provisions of the regulations on the matter.”