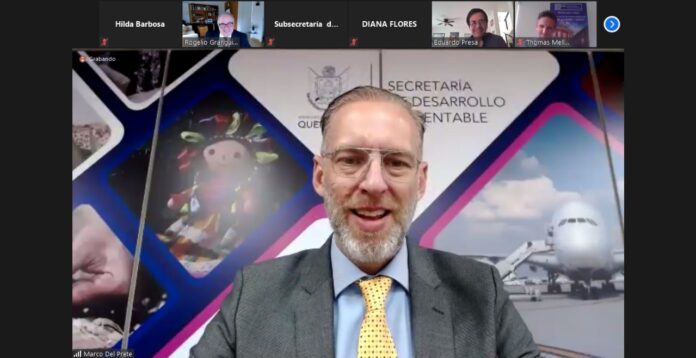 It is intended to consolidate a regional project that adds Aguascalientes, Guanajuato and San Luis Potosí.

Querétaro, Qro. Germany and Querétaro strengthen the commercial and educational relationship that links them, through the establishment of German companies based in the state and promoting the dual education model.

The German ambassador to Mexico, Peter Tempel, highlighted the attraction of German foreign investment to the central Mexican state, making the country one of the main commercial partners of Querétaro.

“In economic terms, Germany and Querétaro already have a close bond, it is one of the main investors in Querétaro. From 2008 to 2019, Germany’s Foreign Direct Investment (FDI) has gone from 46 million dollars to more than 200 million ”, he said.

In the accumulated from 1999 to 2020, Germany adds 1,130.9 million dollars of FDI, becoming the fourth largest investor in the state, below the United States, Spain and Canada, according to the Ministry of Economy

The dual scheme is another of the meeting points and by which German businessmen, business chambers, clusters, state educational institutions and state agencies signed an agreement to forge the Querétaro-Germany strategic alliance to promote this educational model, as well as the creation of the State Liaison Council.

During the signing, the German diplomat indicated that it is necessary to strengthen investment in the training of professionals and in education, in a joint effort by both government entities and the Private Initiative.

Establishing a vocational training system, he said, is a long process that involves forging sustainable structures.

The Secretary of Education of Querétaro, José Carlos Arredondo Velázquez, pointed out that this initiative strengthens the relationship with Germany; He also stated that it will seek to consolidate a regionalization project that includes the entities of Aguascalientes, Guanajuato, San Luis Potosí and Querétaro.

Currently, he said, in education, a diagnosis is also made of the lag in learning and educational quality of the student population due to the pandemic.

The rector of the Technological University in Querétaro, Agustín Casillas Gutiérrez, explained that through the State Liaison Council it is planned to create strategies to continue with the triple helix policy, as an alliance between academia, business and the government as a facilitator.

The nature of the council, he added, is of an advisory nature, for plans and projects, as well as to materialize joint work plans; It will be made up of five sectors: educational, productive, research, social and government.

One of the functions is to create alliances between upper secondary and higher education with the productive sector, through linkage and cooperation strategies, oriented to the economic and social growth of the entity; promote the formation of human capital identified with an entrepreneurial and innovative culture, with initiatives for the generation of self-employment or the creation of companies.

Germany is one of the main commercial partners of the state, where 176 Teutonic companies are based, mainly engaged in the wholesale trade, machinery and auto parts.