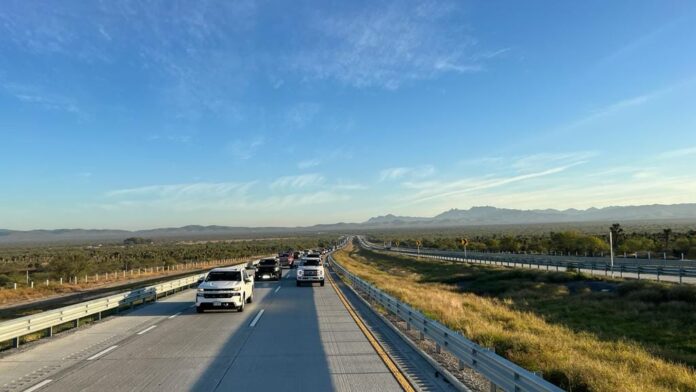 After almost 12 hours on the road, this Wednesday the 14th migrant caravan “Welcome Migrant Friend” arrived in the Sierra de Querétaro and other states, which departed from Laredo, Texas, United States, in which around 1,710 people participated.

Around 3:00 p.m., the contingent of about 700 vehicles arrived in the municipality of Arroyo Seco, and around 7:00 p.m. to Jalpan de Serra, one of the districts where more nationals arrive.

According to Fernando Rocha Mier, president of United Migrants in Caravana AC, the caravan has been held since 2010 with the aim of supporting migrants who are in the United States, who during the month of December return to their communities to spend the holidays December with their families.

As part of the arrival of the caravan, Father Aristeo Olvera, secretary of the association, recalled that the caravan left Laredo, Texas at 5:00 a.m. in an atmosphere of tranquility, and thanked the migrants for respecting all safety and health prevention measures.

Elements of the Querétaro State Police reported through a video that the coordinated work with Tamaulipas in the framework of the Migrant Caravan has already concluded, which has taken into account various health protocols for the protection of travelers.

The 14th caravan will return to the United States on January 3, 2022

The migrant caravan that leaves from the United States to Mexico during the festivities announced that departure dates were added, according to the Office of Migrants and International Liaison of the Government of the State of San Luis Potosí.

The caravans will depart on December 16, 17 and 18 from Laredo, to Monterrey, from there to Saltillo, Matehuala and in El Huizache, 47% are diverted to Querétaro, 22% to San Luis Potosí, 25% to Guanajuato and the others to Michoacán, Zacatecas and Hidalgo, informed Luis Enrique Hernández, director of the Office of Migrants and International Liaison of the Government of the State of San Luis Potosí.

The meeting point to start these trips will be at a Walmart, located at 5610 San Bernardo Avenue in Laredo, Texas.

“It is about avoiding extortion by organized crime and police corporations of various levels, who see in the countrymen a gold mine by stripping them of the dollars and merchandise they bring,” said Juan Fernando Rocha Mier, president of United Migrants in Caravan AC in a statement.

The first caravan left on December 8, in the social networks of Migrantes Unidos en Caravana AC, photos and videos of the families arriving in Mexico safely were shared.

Where to stay in Querétaro? The 5 best hotels according to Tripadvisor