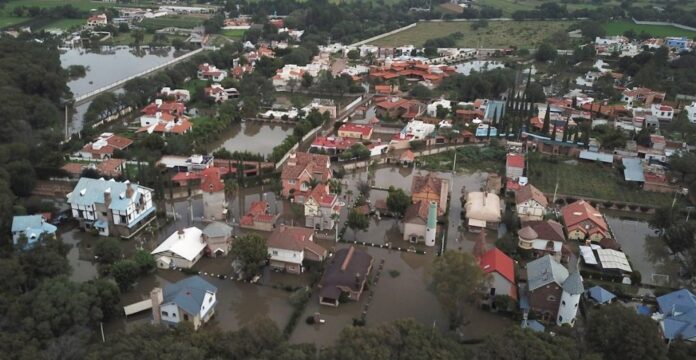 Querétaro. Due to runoff from the San Juan River and the Centenario dam, which is at 107 percent of its capacity, some 100 people, including families and tourists, from the central area of ​​the Tequisquiapan municipality have been evacuated. During the early morning, civil protection personnel used boats to take out children and the elderly who were in hotels in the magical town of that demarcation.

The Sedena applies the DNIII Plan from this Sunday. The evacuated families were transferred to the “Casa del Artesano” shelter located in the Community Development Center of that municipal district.

During the early hours of this Sunday, Civil Protection personnel evacuated about 80 people who were as guests in three hotels located in the downtown area of ​​the magical town, mainly children and an elderly adult who were in the place, revealed staff of the municipal government.

The municipal president, Antonio Mejía Lira, indicated that the Sedena lent them boats to be able to make tours because they anticipate that the flow of the river that crosses that municipal demarcation will grow even more.

The authorities also determined as a preventive measure to cut the electricity in the historic downtown area, and the lower part of the Magdalena neighborhood and Hacienda Grande, in addition to closing the main roads of the first square of that area of ​​Tequisquiapan.

In a tour made by the municipal president of Tequisquiapan, the independent Antonio Mejía Lira and the General of the 17th military zone in Querétaro, Elpido Canales Rosas detected that the Centenario Dam continues to receive runoff from the San Juan River. This means that the river that crosses the magical town has reached one hundred percent of its capacity in the lower part of the municipality and in the central area of ​​that municipal demarcation.

Municipal authorities revealed that the Centenario dam has discharged 100 cubic meters into the river flow and that it, in turn, generates runoff in the lower part.

The municipal authorities have recommended to the inhabitants of that municipal demarcation that they keep important documents in plastic glasses, turn down the electric power switch, close gas and water taps, as well as raise furniture and electronics as high as possible. Also, keep a family member informed about their location and take refuge in the shelter or with a friend.

Some families who live in the downtown area have determined to protect their assets and leave the place due to the fear that the water levels affect them.

Sedena staff help families with the delivery of sacks with sand to act as dikes and contain the entry of water to the homes.