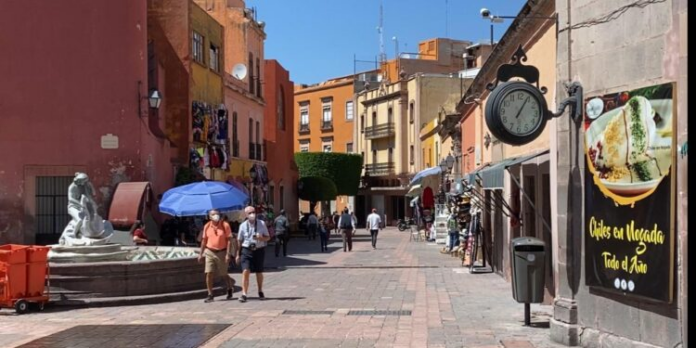 The State of Mexico is the entity with the largest number of economic units in the country; followed by Mexico City and Jalisco.

The National Institute of Statistics and Geography ( INEGI ) released the data from the National Statistical Directory of Economic Units (DENUE) where it determined that Querétaro has 93 thousand 666 active business units.

Of this total of economic units, the activity that gathers the most businesses in the state is that of retail businesses, with 36 thousand 755; in second place, with 12 thousand 940, are the services of temporary accommodation and preparation of food and beverages, followed by other services (except government activities), with 12 thousand 788; manufacturing industries, with 8,110, and health and social assistance services, with 4,946.

In general terms, Querétaro ranked 21st nationally with the most registered businesses, below Morelos (110,685) and surpassing Tabasco (85,486).

Likewise, the State of Mexico is the one that concentrates the largest number of economic units in the country, with 699 thousand 981; in second place Mexico City, with 474 thousand 046, and in third place Jalisco, with 377 thousand 777.

The 15 top employers in Querétaro

Only the 15 most employing companies in the state are responsible for providing 42,854 jobs.

Querétaro has experienced sustained business growth in recent years, thanks to the injection of foreign capital, which generated an economic spill in 2020 of 845.7 million dollars. This has made it possible to increase its capacity to grant formal jobs to the population since only the 15 most employing companies in the state are responsible for 42,854 jobs.

In March 2021, 611,101 insured jobs were registered in the state before the Mexican Institute of Social Security (IMSS). The above suggests a growth of 0.7% in employability, in relation to the month of February, where 606 thousand 706 employed persons were registered.

Likewise, the manufacturing industry establishments concentrate the largest number of employees in the state (22.7%), followed by Commerce (16.3%) and Construction (11.8%). These three items collectively group 50.9% of the entity’s occupation, according to data shared by the Ministry of Labor and Social Welfare (STPS).

Of the total number of companies that generate sources of work in the state, the following establishments stood out as the top employers in Querétaro until the first quarter of 2021 (last record of the STPS):

This organization arrived in Querétaro in 2009 by installing its first plant in the Tepeyac Industrial Park. It currently has two factories located in the state, in which they manufacture seat belts and airbag cushions.

Out Helping is a company founded in the state in 1999, which provides solutions in personnel subcontracting, talent attraction and evaluation, payroll maquila, occupational health management, and relocation services for foreign employees.

Banco Santander México is one of the institutions with the widest range of financial products and services. It has a service platform aimed at the middle and high segments of the population, as well as small and medium-sized companies. In Querétaro it employs more than 3,000 people through one of its four most important data processing centers worldwide.

It should be noted that at the end of 2020 this company announced the construction of its new development “Querétaro District”, a corporate development that will begin operations from July of this year. The bank assures that it will become the main employer in the entity’s private sector, reaching 10,000 employees.

The Autonomous University of Querétaro (UAQ) is a public institution of higher education of the State, founded on February 24, 1951.

It is the largest educational institution in the state. With 11 campuses and almost 30 thousand students, it employs 3,358 workers.

Bombardier Recreational Products (BRP) is a Canadian company with a presence in Querétaro since 2012. It has a plant in the state where they manufacture jet skis, snowmobiles, wagon vehicles, and off-road vehicles. This organization of the automotive sector manufactures Sea-Doo brand jet skis.

Samsung Electronics Digital Appliances Mexico is a technology company founded in 1969, with a presence in 73 countries and with more than 320,000 employees around the world.

He arrived in Mexico in 1995 and settled in a representative office in Mexico City. It currently has two plants in the country: one located in Tijuana, which is dedicated to the production of television screens, and another in Querétaro, where they manufacture refrigerators and washing machines.

This company of Mexican origin offers transportation and logistics services in general. It was founded in 1975. Among its main clients are Samsung, Sony, Kellogg’s, Walmart, Liverpool, among others.

Operadora Wal Mart S. de RL de CV is a chain of self-service and department sales commercial establishments. In Mexico, it has 2,291 establishments that group stores such as Superama, Sam’s Club, Bodega Aurrera, and previously Suburbia. This network of stores includes more than 50 establishments in Querétaro.

Steeringmex S. de RL de CV, commercially known as Automotive Nexteer, is a company in the automotive sector that manufactures parts of steering and suspension systems for vehicles. Founded in 2007, its plant is located in the Finsa Industrial Park, in the El Marqués municipality.

A company dedicated to manufacturing audio systems, both home and professional, and for cars. In addition, it develops software and electronics for smart vehicle connectivity systems. Harman has two plants in Querétaro, which produce radios and amplifiers that are used in Premium vehicles of 16 different brands.

Dana de México Corporación S. de RL de CV is a company in the automotive manufacturing sector that provides components of the power transmission system, such as transmission shafts, off-road transmissions, thermal-control products, and service parts. This organization of American origin has four plants in Querétaro.

Frenos y Mecanismos S. de RL de CV, better known as ZF, is a company of German origin that is dedicated to the production of steering systems and the manufacture of components related to the automotive sector. The company, which began operations in the state in 1994, has two plants in the state.

Bsm SA de CV is a German company that develops and produces mechatronic systems for vehicle doors and seats, as well as electric motors, drives, and electronics for steering, brakes, transmissions, and engine cooling.

This company installed its plant in Querétaro in 1993, where it serves clients such as Nissan, BMW, Ford, among others.

Promotions Latin America SAPI de CV is part of Grupo Map, made up of a team of professionals and companies specialized in promotional marketing, with 38 years of experience. They have 4 business areas: Shopper, Experiences, Digital, and Communication.

This company is present in more than 100 cities around the world.

This company has two production plants in the state, one in San Juan del Río and the other in Amealco de Bonfil.