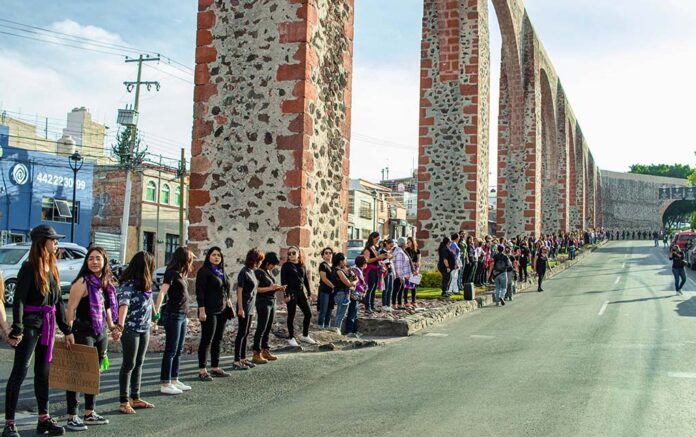 Security, state debt. This was assured by various women interviewed by AM de Querétaro in the framework of the March 8 commemoration. They agreed that employment is another of the current demands.

For 19-year-old Monserrat Rujano, there is no confidence to go out on the street or with friends, because, he added that daily situations of femicides, kidnapping and insecurity are seen and heard.

According to the Executive Secretariat of the National Public Security System (SESNSP), from 2018 to date there are 11,588 femicides throughout the country. Of this number, 28 have occurred in Querétaro during this period.

In the opinion of the 24-year-old law student, Victoria González, the lack of security is in a critical situation for women due to cases of disappearance, as well as for those who have suffered a type of harassment in public transport , in schools and with the teachers themselves, he explained.

The latest data from the National Institute of Statistics and Geography (Inegi) showed that 21.6 percent of women aged 18 years and over suffered some type of situation of sexual harassment or violence in public places in the second half of 2020. This represented a decrease of 5.6 percentage points with respect to the same period, but from 2019.

María del Rosario Mendieta Ramírez, 35 years old and a City Council worker, mentioned that what the State owes her is to guarantee her safety and ensure that there is an environment of respect that, she said, everyone deserves. Guadalupe Rivero, 41 years old and also a housewife, agreed that the pending is for the Government to strengthen respect for them as human beings, people, and citizens.

Regarding the labor plane, more than a million women left or lost their job during 2020, Inegi specified, which detailed that this meant a decrease of 5.2 percent of employed women. Mayra Garfias Cárdenas -21 years old and a single mother- considered that with the COVID-19 pandemic there are no job opportunities, as she shared that employers have told her that they do not want to risk hiring sick or disabled people.

According to the Economic Commission for Latin America and the Caribbean (ECLAC), the wage gap between women and men reaches 22.8 percentage points when there are children under 5 years of age in the household. When there are no infants in the house, they receive 6.2 percent less in wages. Likewise, Estefany Gabriela Muñoz Téllez, 27, said that there is a disregard by society for women who want to be entrepreneurs.

He stressed that the speech is “not going to be able” and pointed out that a little more support is required in this regard. Likewise, 32-year-old Fatima Bautista -who makes and sells crafts- indicated that she observes progress to eradicate the problem of making women inferior to men, however, she reiterated that there must be more support so that they can excel in different areas.