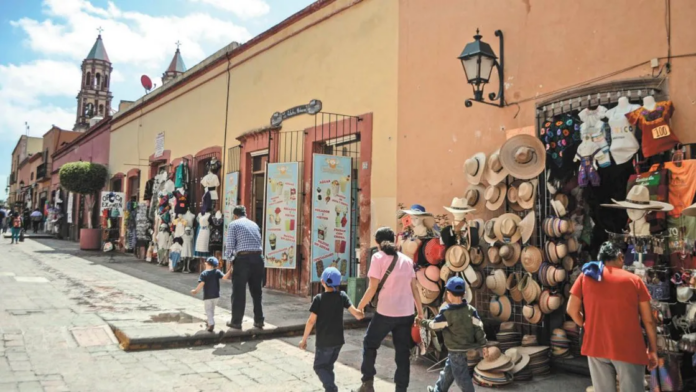 Canaco considered that due to the new adjustment to the modified Scenario A there will be a 20% increase in sales since the measures favor consumption and encourage the recovery of the sector in Querétaro.

Querétaro, Qro. After the new adjustment to the modified Scenario A –which governs the opening of economic activities in the state-local businesses are expecting a sales rebound in one of the seasons with the highest consumption of the year.

Only commerce in general advances from a maximum capacity of 70 to 85%, unprecedented opening conditions since the health contingency began and the restrictions began to prevent the spread of Covid-19.

Organized commerce projects a 20% increase in sales, in relation to the days prior to the application of the new scenario, said the delegation president of the National Chamber of Commerce, Services and Tourism ( Canaco Servytur ), Fabián Camacho Arredondo.

It is a scenario that favors consumption on December dates, encouraging the recovery of commercial activity, but also facilitating the economic growth of 8% per year projected by the establishments associated with the chamber.

It is a favorable scenario to be able to move forward in this holiday season, it will allow an important consumption exercise for a relevant date for commerce in Querétaro and that will allow at least a 20% increase in sales, it generates the possibility of approaching the end of the year with numbers favorable and that allow us to reach the end of the global year in matters of growth of 8% in this 2021 “, he declared.

Local commerce, he said, celebrates the determination of the Technical Committee for Attention to Covid-19, as they consider it a recognition of the application of sanitary protocols in businesses.

“We recognize that it is a sign of an exercise of trust provided by the health authorities and recognition of the work that formal and organized commerce has had due to compliance with health protocols (…) In concrete terms we celebrate it because it is recognition for complying with the protocols and because it is the scenario that allows us to continue advancing at the end of the year and meets growth expectations ”, he said.

Although the new modified Scenario A will be in force for at least the next two weeks, he added, it is a recognition after having spent seasons such as Days of the Dead and Good End that meant risks of increases in infections.

For small businesses, the change in the scenario brings the possibility of approaching the end of the year with a level of sales close to the prepandemic level, since it is an incentive in the recovery of business, said the president of the Chamber of National Small Trade ( Canacope ), local, Sergio Martínez de León.

“We believe that all commercial activity is essential, we were striving to have the closest thing to a pre-pandemic operation, of course, it benefits us. It is one of the most important dates, having 85% capacity is excellent news for us. With these modifications we are sure that by the end of the year we will be at 100% recovery of pre-pandemic sales ”, he pointed out.

The beginning of December means a time of constant sales, which continues towards the first half of January; reaching these dates with extended hours, which had not been reached since the start of the pandemic, facilitates the recovery process. It is also expected to influence the rescue of at least 300 of the 600 businesses that the chamber identifies in technical bankruptcy, the Canacope official added.

“We urge the business to continue with health measures and protocols in order to protect customers and people who work in the business itself, we urge them not to relax because then we fall into this false optimism and we see dynamism similar to before the pandemic and let’s relax the measure, “he said.

Among the changes to the modified Scenario A, the expansion of capacity in shops, supermarkets, and convenience stores is listed, from 75 to 85%, for shopping centers the increase is from 60 to 75%, in restaurants they go from 75 to 85 %, nightclubs from 75 to 85%, in addition to the sale of alcohol without restrictions, since its sale is allowed according to the operating license, every day of the week.

Hotels also go from 75 to 85% capacity; also for entertainment centers and religious centers. Mass events and recreational centers with 50 to 65% capacity; the prohibition of work meetings (congresses, etc.) with more than 300 people, in the previous scenario the restriction was 250 people, among other measures.

The new measures considered by Scenario A in Querétaro are:

In the case of terraces or outdoor places, the corridors or distance between the tables may not be less than 1.5 meters and / or maintain a maximum of 85% occupancy. Use of a mandatory mask when traveling inside the premises.

Queretaro residents of Colinas de Menchaca, tired of insecurity, detain a thief and set fire to his vehicle

Man dies trapped inside a vehicle at the Mompaní dam, Queretaro