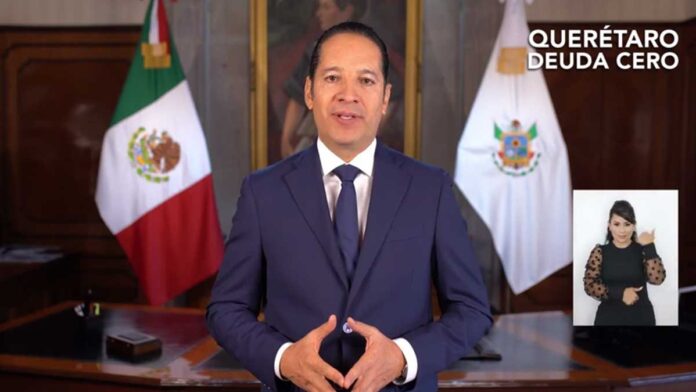 The Governor of Querétaro, Francisco Domínguez Servién, announced that the debt of one thousand 144 million pesos, inherited from the previous administration, is 100% paid.

Besides Querétaro, how many states in the country do not have debt?

He explained that Querétaro and Tlaxcala are the only states in the country with “zero debt” bank, and announced that at the close of his government the debt with suppliers will also be fully paid.

“We did it without stopping spending on works and actions; ensuring each peso required for hospital reconversion and each of the stages of the pandemic, without contracting additional public debt and without raising a single peso of TAXES”.

In addition to the issue of debt, the state president also recalled that at the beginning of his administration he committed to the vision of growing, thinking of the generations of tomorrow.

“I offered to do so by giving priority to health, security, education, the economy and the integral development of Queretaro families; with the thought in the present and the future of the state, placing the dignity of the people in the center of each one of our decisions. Today the public finances of Querétaro are healthy; this is accredited by the federal authorities and the rating companies that recognize an efficient and exemplary management of public resources ”.

Domínguez Servién said that this translates into the fact that today Querétaro is synonymous with trust, which is credited with indisputable national leadership.

Among those leaders, he mentioned the best security and justice model in the country; the generation of well-paying jobs; a general hospital that places the state as a national benchmark in public health; a citizenry that demands and is involved, as well as a responsible government that does what must be done.

“Querétaro is today a national example, but this is not enough; We will continue working together for peace, equality, productivity and the leadership of Querétaro, to consolidate it as the pride of Mexico; we will continue to comply with FACTS” .

Through the Ministry of Urban Development and Public Works (SDUOP), urbanization works were carried out, rehabilitation of cobblestones, construction of streets, sidewalls, sidewalks, cobblestones drowned in mortar, expansion of the sanitary drainage network, as well as rehabilitation of the asphalt layer in various neighborhoods in the municipality of San Juan del Río.

Romy Rojas Garrido, head of the SDUOP, reported that works were carried out in six neighborhoods, where nine streets were intervened in the Barrio de la Cruz, 21 streets of El Pedregoso, two streets of Lomas de San Juan, one street of the Magisterial, four streets from Villa de las Flores and four streets from Indeco.

Actions are currently being carried out in nine neighborhoods and towns in San Juan del Río, which include milling and re-folding of roads, sidewalks and sidewalks, paving paved in mortar, as well as the improvement of the public square in the town of San Pedro Ahuacatlán and the construction of a roof in the park of the common area of ​​the Rancho Banthí neighborhood

Querétaro, third most competitive state in the country

In 30 entities of the country, more than 75% of adults considered that corrupt practices in the state government were frequent or very frequent; however, Querétaro and Yucatán were located below this line.

The Mexican Institute for Competitiveness (IMCO) published the State Competitiveness Index 2021 (ICE), which measures the capacity of states to generate, attract and retain talent and investments, where Querétaro ranked third as the state with the highest competitive of the country.

Likewise, the first place in this ranking was obtained by Mexico City; the second place, Nuevo León; fourth place, Coahuila; and the fifth place, Jalisco.

This IMCO Index assesses both the structural and conjunctural capacities of the states; where the ICE is made up of 72 indicators, categorized into 10 sub-indices that assess different dimensions of competitiveness in all the states of the country.

It should be remembered that Mauricio Kuri González is the elected governor of Querétaro, for the period 2021-2027, after having won the state elections on June 6.

In his speech, after receiving the verification of the majority from the Electoral Institute of the State of Querétaro (IEEQ), he said that he will receive an orderly, professional administration that has given great results and that has put Querétaro on the national map, as an example of competitiveness and prosperity.