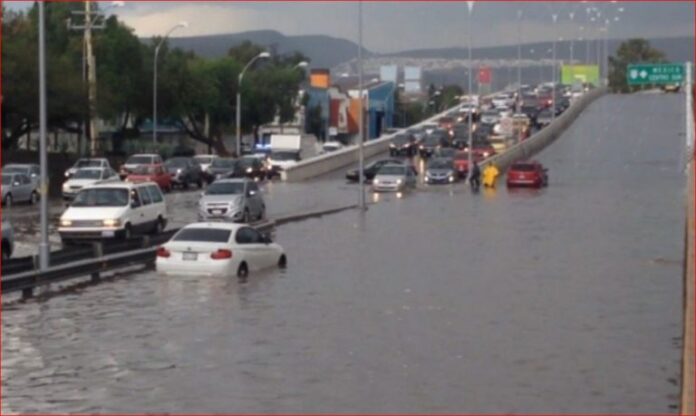 An intense rain registered in the city of Querétaro caused severe flooding, the fall of fences, the entry of water to homes, in addition to the force of the storm current dragging vehicles in some streets of this municipality.

Among the affected areas, the San Pedrito Peñuelas neighborhood was identified, where the water caused damage to at least 10 cars that were washed away by the rain, in addition to at least five other units that were affected.

In Obreros street in the same neighborhood, the entry of water to homes was also reported.

While in the Paseos del Pedregal neighborhood, emergency services personnel attended to the collapse of a fence derived from water runoff, affecting 4 commercial establishments and vehicles in the place.

Civil protection personnel and firefighters maintain support tours and damage assessments without any injuries being reported at the moment.

They invited the population to drive with extreme caution, slow down and keep their distance from other vehicles.

Moderate to heavy rain is registered in the north of the city of Querétaro. Drive with caution. In case of any emergency, call 9-1-1 ”, they reported.

Approximately 400 homes were affected by the rains in San Juan del Río, for which municipal authorities installed shelters with a capacity for 300 people.

The greatest damage due to rain occurred mainly in the Center and the colonies of México, La Floresta, Villas del Puente, El Pedregoso, Ampliación Banthí, San Cayetano and Las Águilas.

Military Zone number 17 implemented the DN3 plan to support the population, to carry out the removal of rubble and mud.

At a press conference, the municipal president of San Juan del Río, Guillermo Vega Guerrero, reported that cleaning support is being carried out in residential houses with brigades from the Army, Municipal Services and the Potable Water and Sewerage Board.

He added that the roads will have to be rehabilitated for which an investment of 80 million pesos is required.

The official said that the Basic Education Services Unit of the State of Querétaro (USEBEQ), announced the suspension of classes in at least four educational establishments that had material damage to their infrastructure.