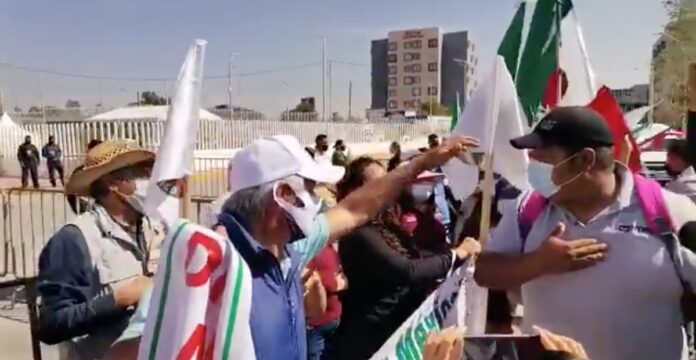 The president of Mexico, Andrés Manuel López Obrador , was received with protests and shouts from residents this Friday in Querétaro , where he traveled to lead the inauguration of the General Hospital of the state.

The residents, who protested with flags, tarps, and banners outside the hospital, shouted ” out Lopez ” when the president arrived at the medical center.

A group of women also launched slogans against López Obrador for the president’s decision to reject the call to “break the patriarchal pact” with Félix Salgado Macedonio, accused of sexual abuse and until recently Morena’s candidate for governor of Guerrero.

” López Obrador defends rapists,” shouted the women outside the General Hospital of Querétaro.

Supporters of the president also came to the scene to support the president, and responded to the protests by chanting that “it is an honor to be with Obrador.”

During the inauguration of the General Hospital of Querétaro, the president, accompanied by Governor Francisco Domínguez, assured that “it is very important to resume the path of development and well-being”, as well as “emulate the good leaders that have existed in our country ”.

López Obrador also pointed out that he went to the state to show unity in the fight against the coronavirus pandemic.

“When the governor invited me, I said ‘let’s go’ because it is necessary to send a message of unity and say that we can have differences, but there are many things that unite us,” said the president. “We must always put the general interest, the homeland, first. The people come first ”.

Young people hospitalized in Querétaro have a common factor; trips to Mazatlán and Cancun

Toluquilla Archeological Site: the “hunchback hill” in the heart of Queretaro’s Sierra